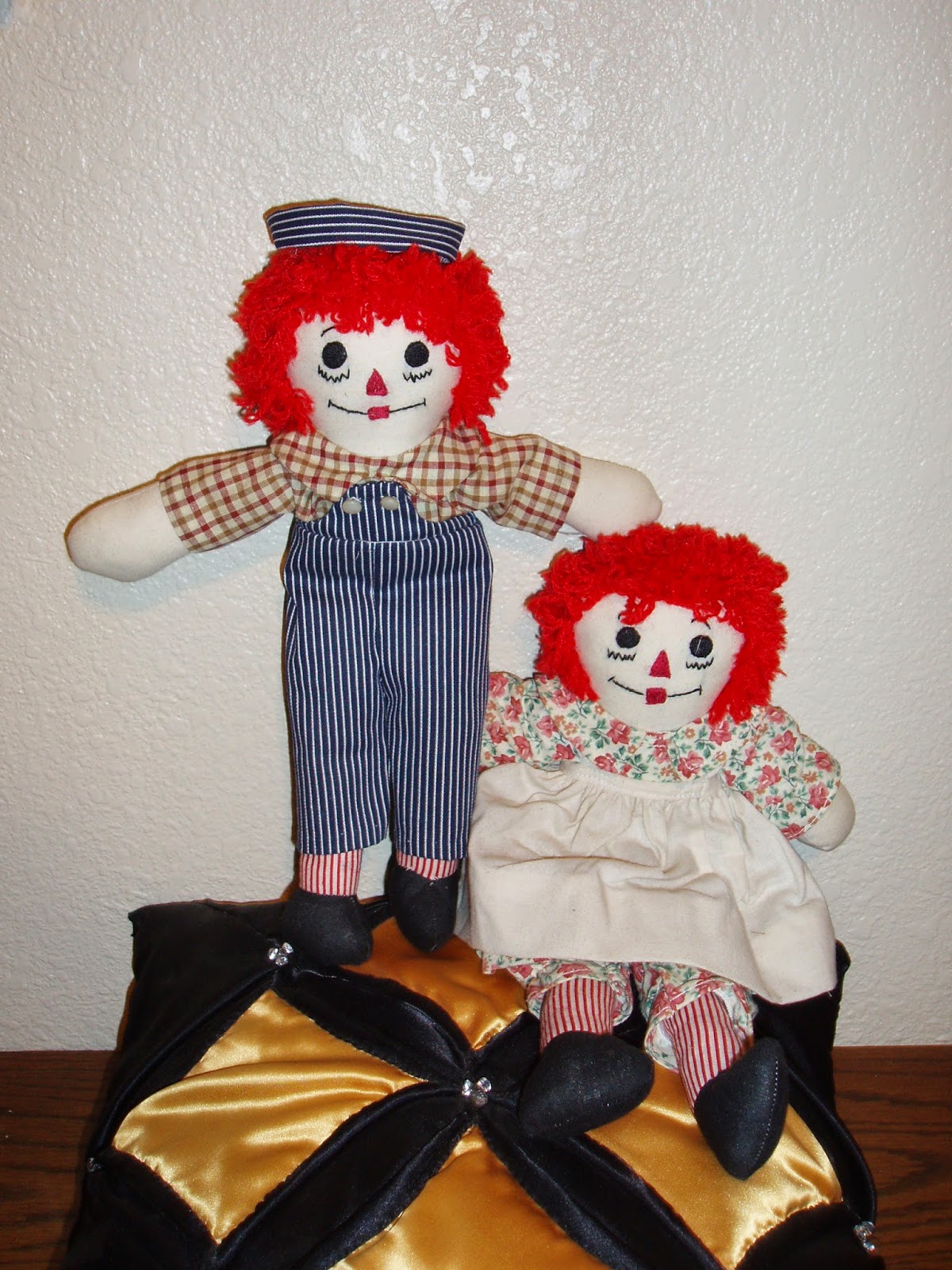 Above is my submission to the SMS Softie contest.  The Raggedy Ann & Andy are each approximately 7" long.  I used all scrap fabric, yarn, and notions, and hand embroidered the face on each of them.  The "hair" was added like you would hook a rug.

I made the dolls using a Simplicity pattern from long ago.﻿ 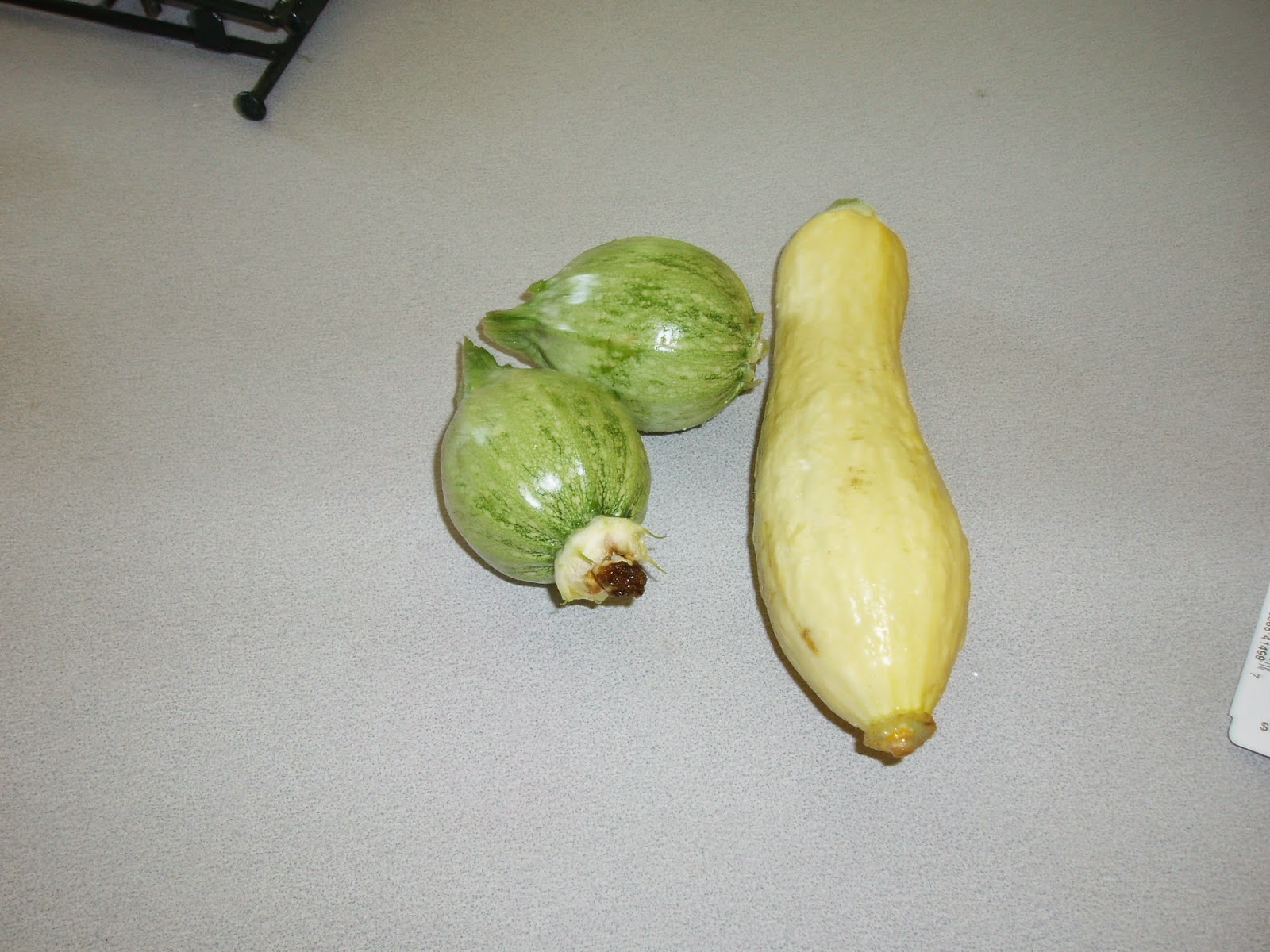 I am particpating in Harvest Monday located on Daphne's Dandelions.  Please visit her site to see more gardener's who are participating.   I have actually harvested a lot more than this, but forgot to take the camera.  This was harvested on Sunday, so I am showing Sunday's harvest on Monday :)  Yellow Straightneck and Ronde de Nice squash.  Very good! 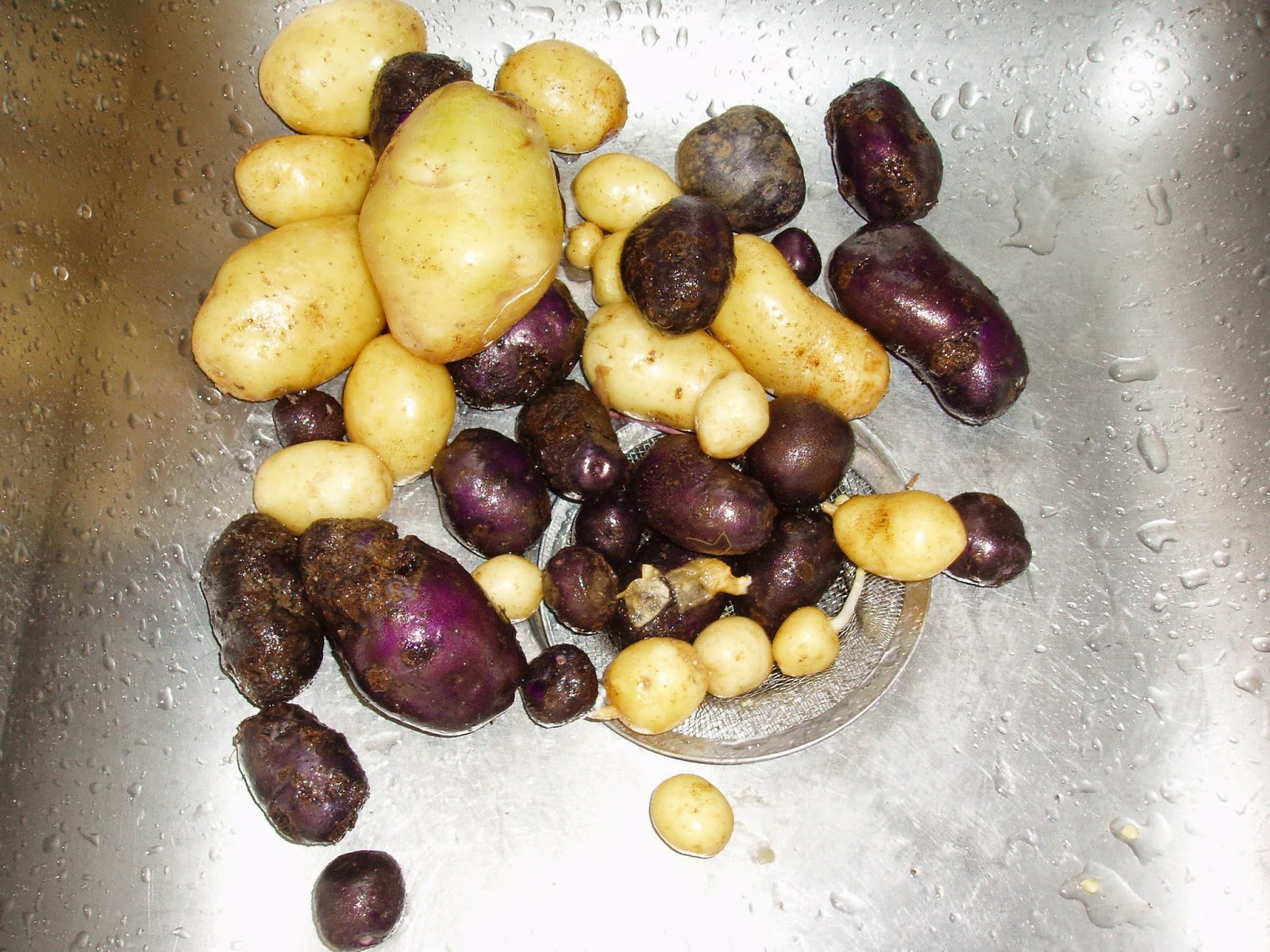 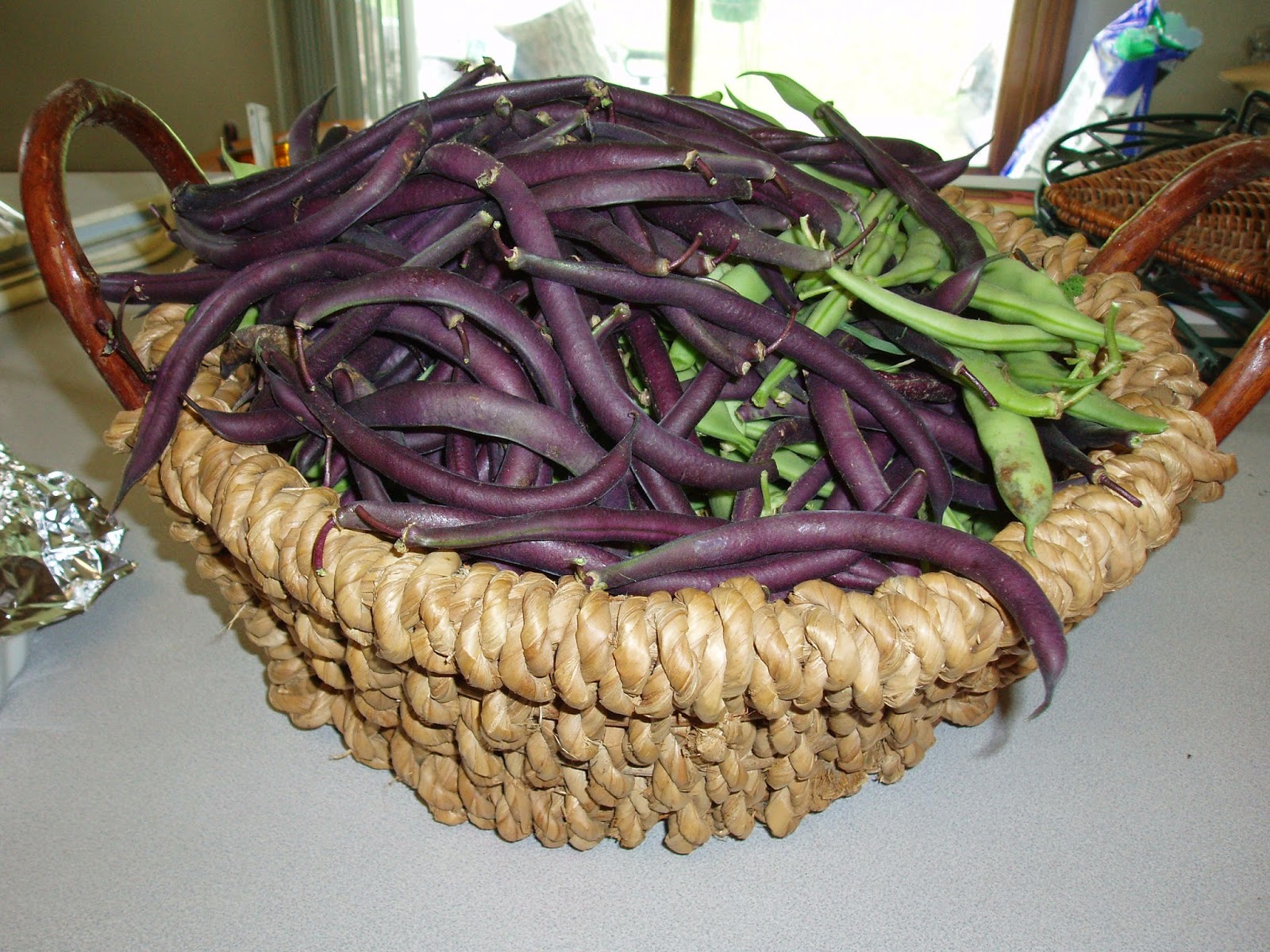 Purple Queen, standard green, and Italian green beans.  I love the Italian beans the best.  They are "meatier" and most tasty than the others.  So far, I have canned 40 pints of green beans!  My goal is 75 pints.  We will see if I reach that goal.

Everything is just ducky, and clucky, and mooey, and veggie...

Things are going pretty good on the homestead.


I hope everyone is having a wonderful summer, and getting out and enjoying the weather!

I have been sewing some.  Sewing will be more heavy during the winter!  There are just too many other things to do around here this time of year.

This was my first year to plant everything (w/ the exception of potatoes and onions) from seed.  It was quite the success.  I am going to try growing all my onions in 2015 from seed.  We will see how that goes.

My goals for 2014 gardening is to grow enough tomatoes, peppers, and onions to not have to purchase any from the store.  I do not think I will get there on the tomatoes because I put them out too early, and several of them died.  When I say I put them out too early, I mean I put them out the last week of April and first week of May.  Lesson learned.  From here on out, they will not be placed in the garden until mid-May and on.  I still have several tomatoes, but I do not believe I have enough provide all my sauces, etc. that I would normally purchase.  Dangit!  Oh well, there is always next year.

We have been independent on the following for the past 1 - 3 years:
Potatoes
Carrots
Green beans
Corn
All herbs
Squash
Okra
Asparagus
Salad greens - I only eat salads during the Spring/early summer.  When my greens are gone, salads go the way of the dinosaur until next year.

We also planted more blackberry bushes and two blueberry bushes.  I did also plant another peony bush.  I try to add one every couple of years, because I love them so much :)  Next year, I plan on purchasing two more peony bushes and three rose bushes to round out the west side of my house.

Our fruit trees are doing well, along with our grapes.

I am working on smothering out an area by our back garden to place strawberries next year.

Veggie:  One is 13 x 48 feet, and the other is 25 x 62 feet.  Weeding is a challenge, and one I do not enjoy; however, I have pledged to do a better job than in the past at keeping the garden as weed free as possible.

Herb garden:  4 x 13 feet - It needs to be amended this winter.  This is where I plant my asparagus as well.

All in all, a very productive gardening season so far.

Between the gardening and milking the cow, we have been busy.  That doesn't count the chickens and ducks, but really, they are pretty self-sufficient this time of year.

Well, February's MAGAM didn't take no time at all, and it looks pretty good.  I cut out and sewed it together on February 1st. 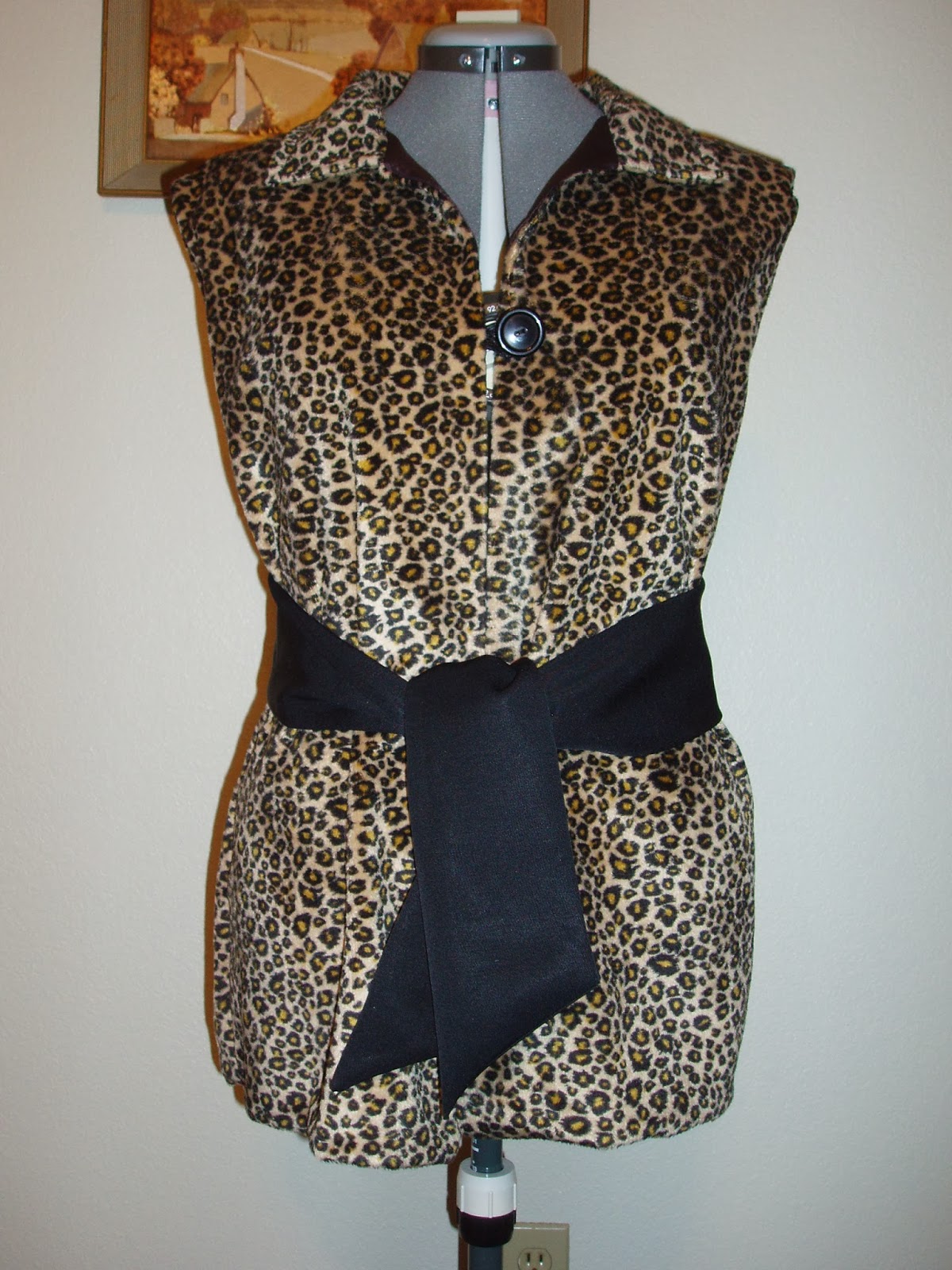 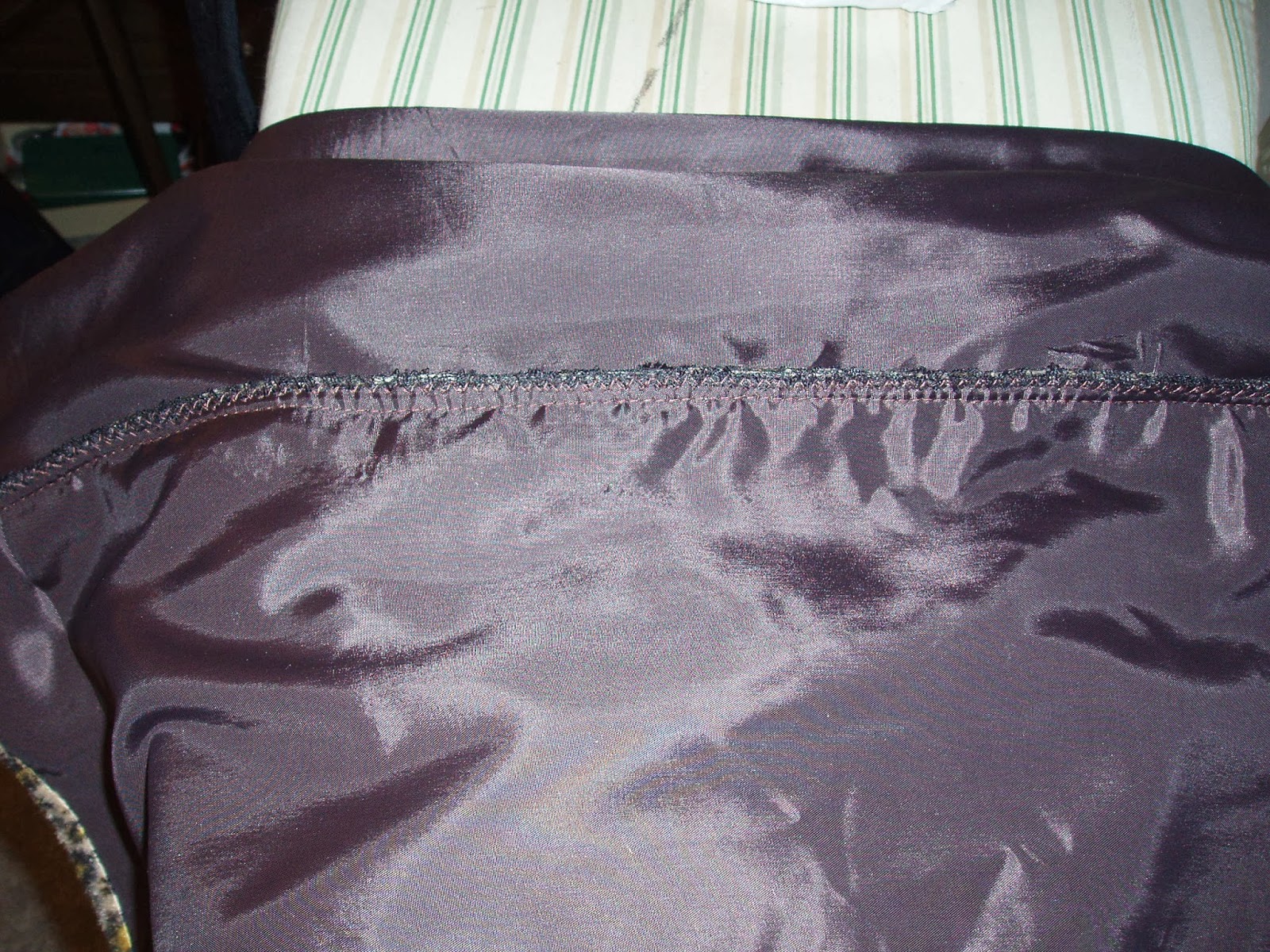 I made a black tie belt out of an old pair of black pants.  The fabric was still good, but the pants no longer fit.  I lined it with a brown poly lining, which was slick as can be.  I got through it, but I need more practice with slippery fabrics.   I cut a size 14, and didn't change anything, except I added a black button at the top with an black elastic loop.  I think it looks better that way.  It should be pretty warm, and should add a bit of snap to my normal conservative wardrobe.

And I just finished a simple turtleneck today using McCalls 6796.  I used this pattern before when making my January MAGAM.  The knit fabric is thin, so it was a bit tricky to sew.  I used the knit stitch on my machine, and things went pretty well.  I cut a 14, and the only thing I did on the sleeves was remove about 3/4" from the sleeve cap; otherwise, there was not way to insert the sleeve without there being puckers.  Other than that, it went together good.  I love this McCalls pattern, and will use it a lot.  The next time I make the turtleneck, I will double the neck collar width so, it can fold over like a true turtleneck.  This will go good w/ my brown wool skirt, and khaki pants.  I also have two cardigans that will go great w/ the top.  I want to make a short sleeve version of this pattern pretty soon.  I think I will use some white t-shirt knit fabric.  I need a decent white t-shirt for spring and summer. 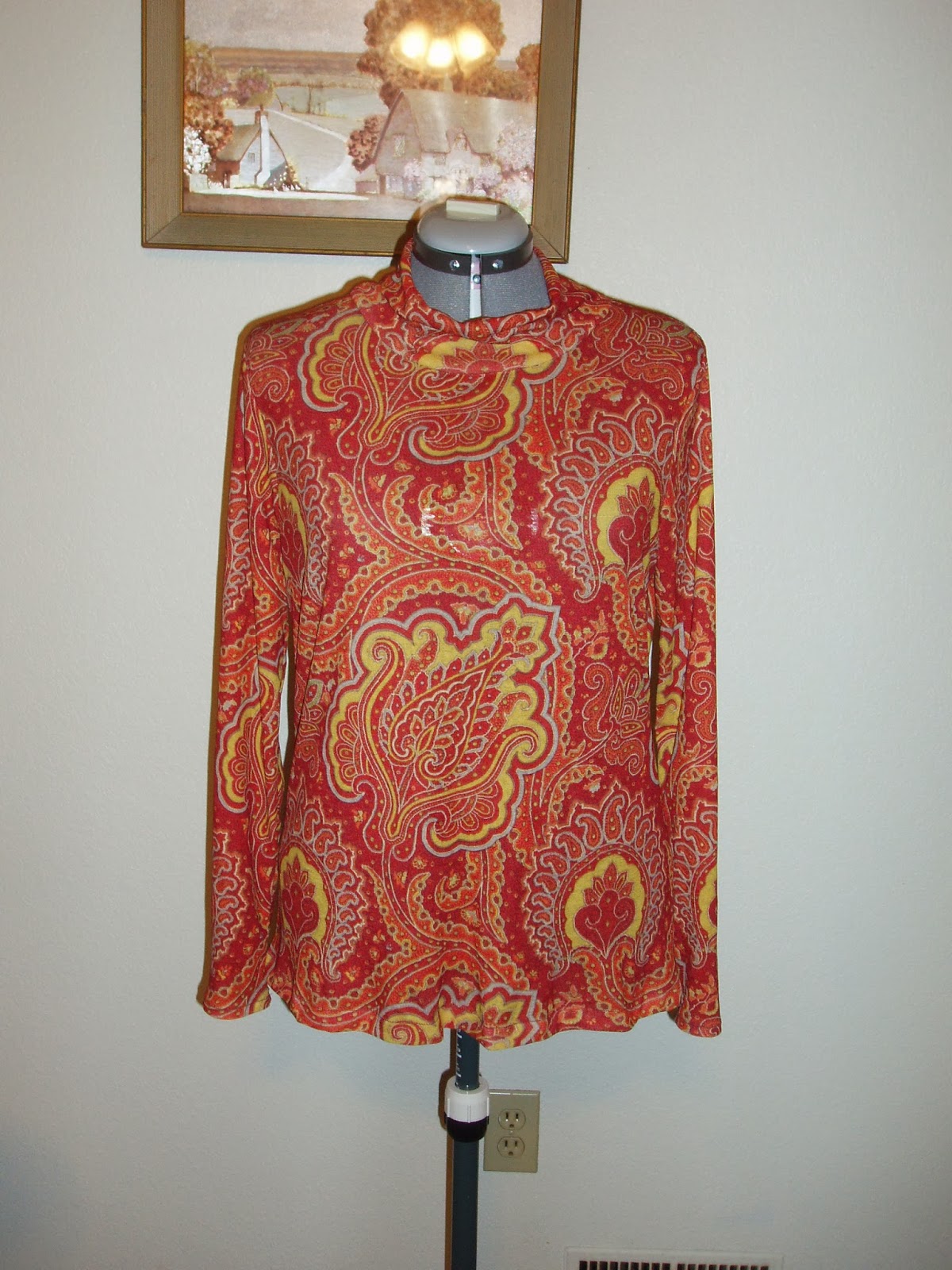 Well, I have at least one more garment I want to sew in February, and that is a pair of Thurlow pants out of khaki twill fabric.  I should have enough of the fabric left over to make a khaki skirt.  I am sewing the pants as part of the Monthly Stitch Challenge.  I am still working out waistband issues on the Thurlows.  I think I am going to use the waistband from my favorite skirt pattern.  I believe it will work well.  I can make some adjustments if needed.  If I can get the pants made by mid-February, then I have one last winter top I want to make before I start in on my Spring/Summer outfits.

I know I should model these items, but I am getting the same crud everyone in my office has gotten.  I was hoping I would get by this winter w/o getting sick, but w/ all the hacking and sneezing, I guess it was inevitable. :(

I am starting out as a busy bee on sewing, and hope I do not loose steam before the month is done :)

In other news, I would like to introduce you to Sir Loin - The Beef Cake.  He was born on 01/31/13 @ 3:30 a.m.  He is a sweet little man, and his momma is doing an excellent job taking care of her little guy.   Jerseys look like little deer when they are born.  It will be interesting to see what color he ends up being.  The sire is black, and I really hope he looks like his daddy. 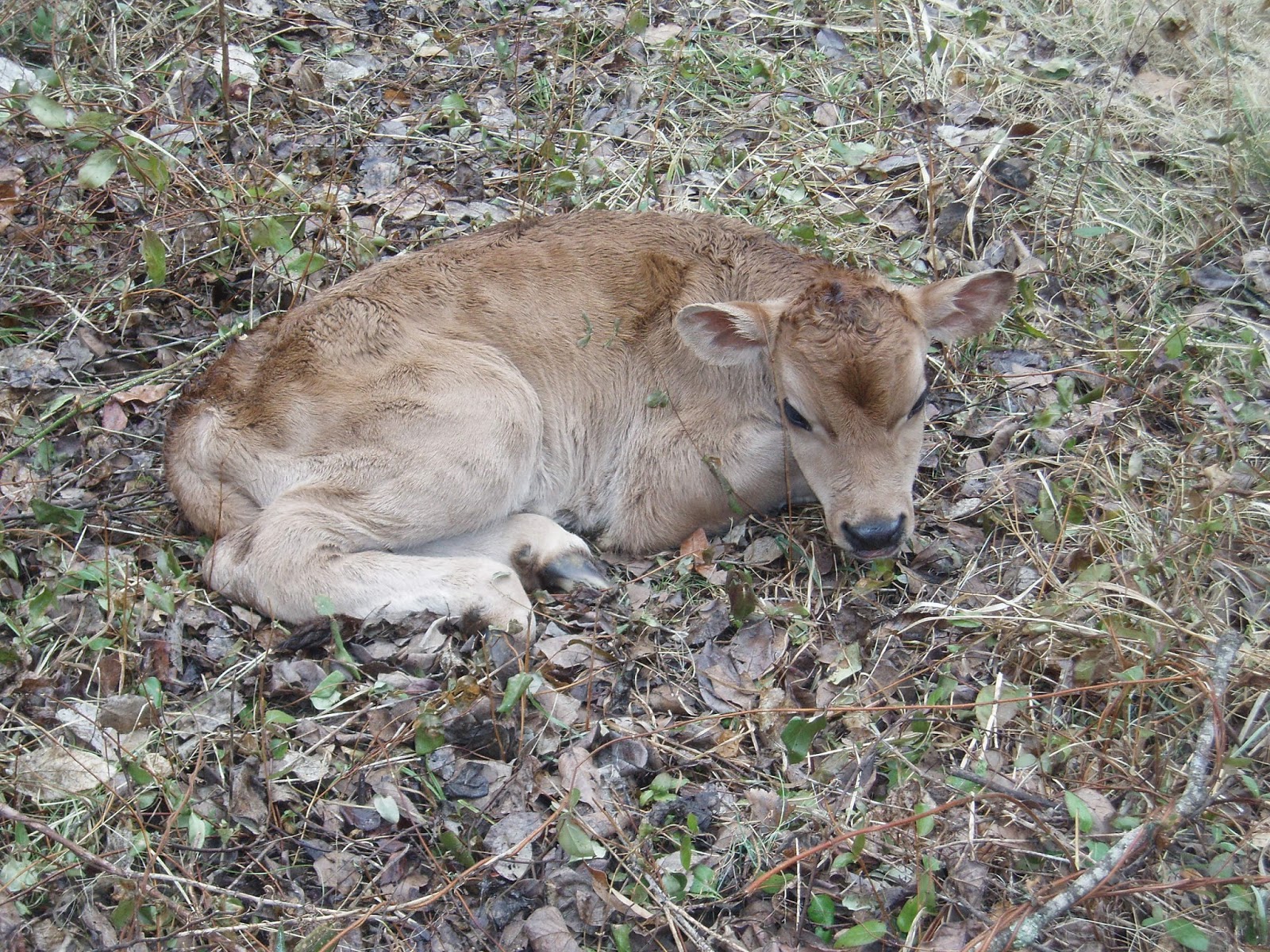 A basket weave scarf was finished a couple of weeks ago.  I knitted it out of some unmarked wool that was in my stash.  It was intended to be a gift, but didn't get finished in time.  It will eventually be a gift for someone now LOL 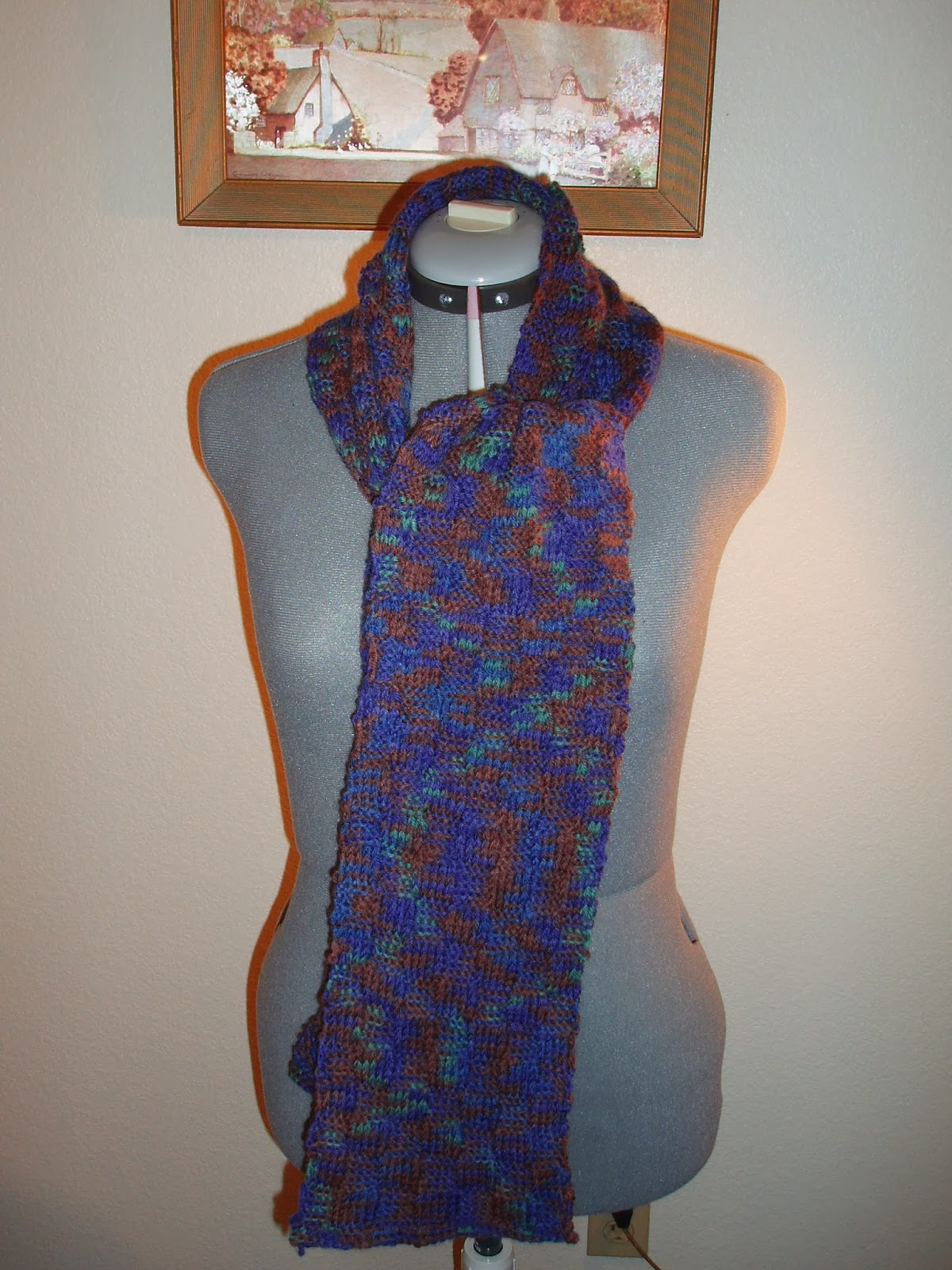 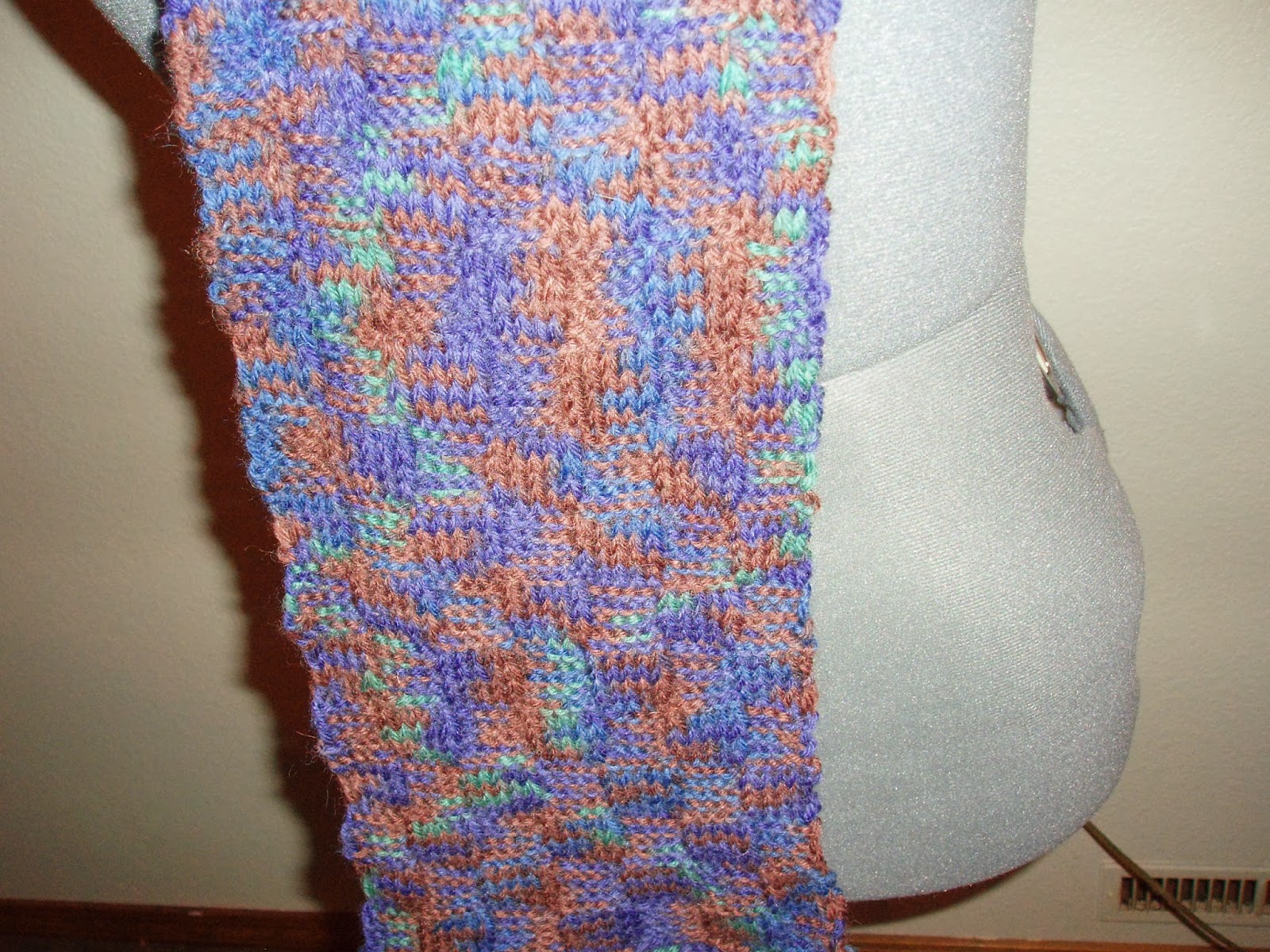 I have also started a pair of simple stockinette stitch socks.  My goal this year is to knit three pairs of sock, each increasing in difficulty.  Sock knitting has never been my favorite, but I want to keep the skills I do possess.  I am knitting these with unmarked ball of Superwash Wool on size 2 needles using the Magic Loop method.  To me, Magic Loop is the way to go for socks.   Double-pointed needles are a pain to maneuver. 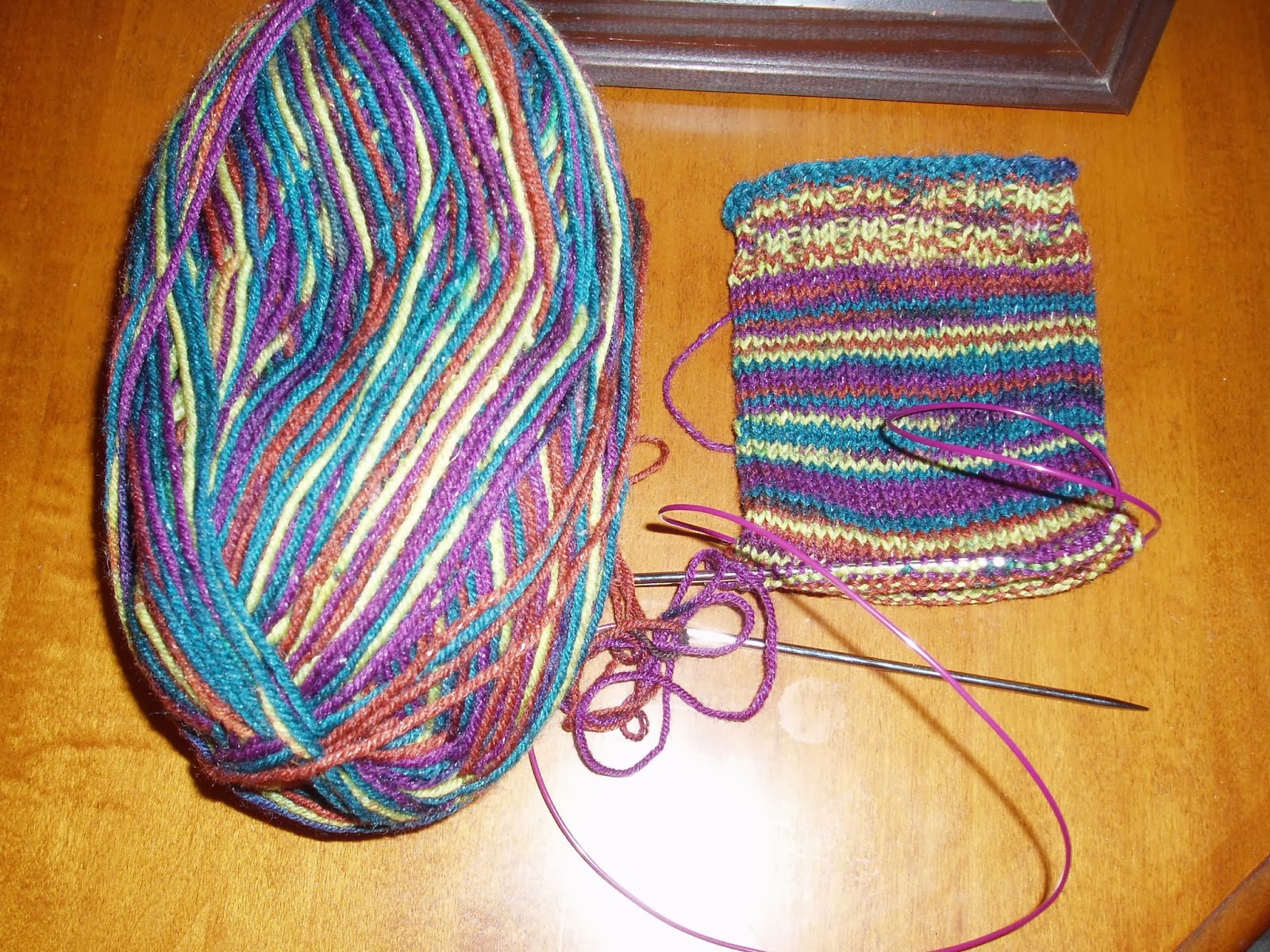 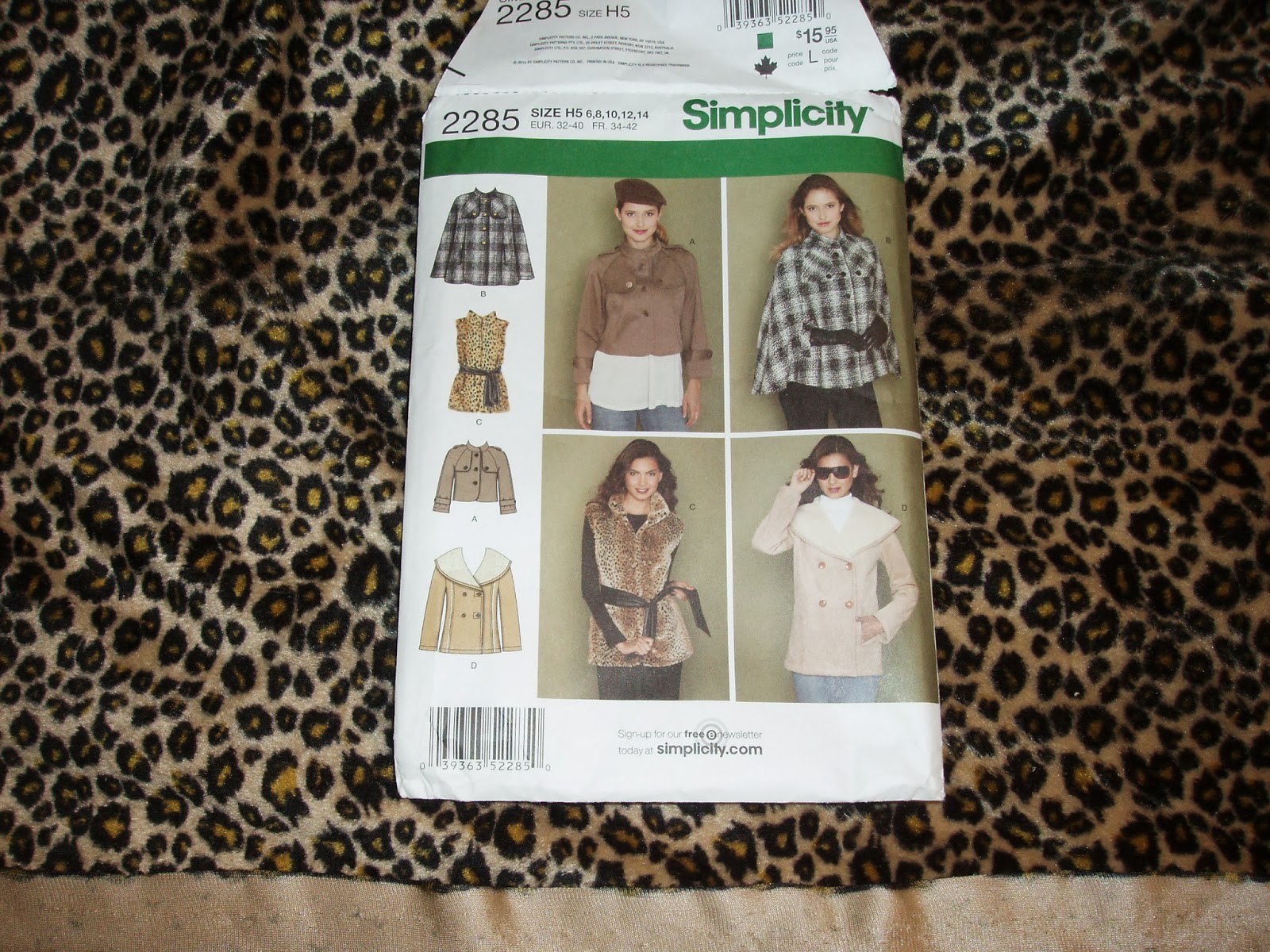 Above is my February MAGAM project.  I will make View C.  It is fairly simple, and I have wanted to make it for quite some time out of the animal print fabric I have had in my stash.  My quandary is the tie belt.  I have black fabric that will work for the tie belt, but I really would like to have a genuine leather tie belt.  Will the skin flint in me win out?  We must wait and see!

In other news, I bought myself a Kindle Fire HD, and love it.  I use it mainly to read, but do piddle around on the web with it as well.

Take care and God Bless!
Posted by Dk's Wife at 3:15 AM No comments: 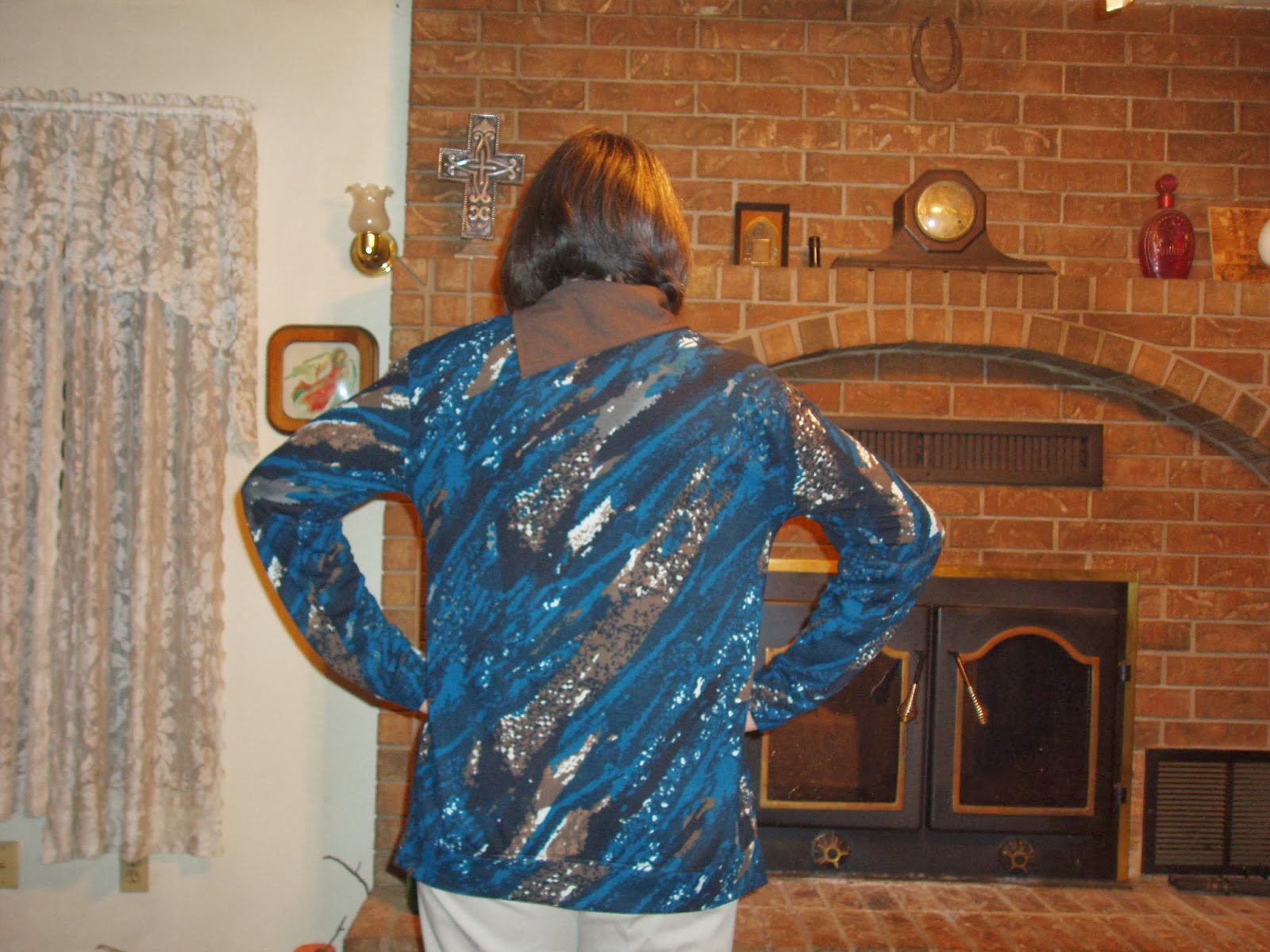 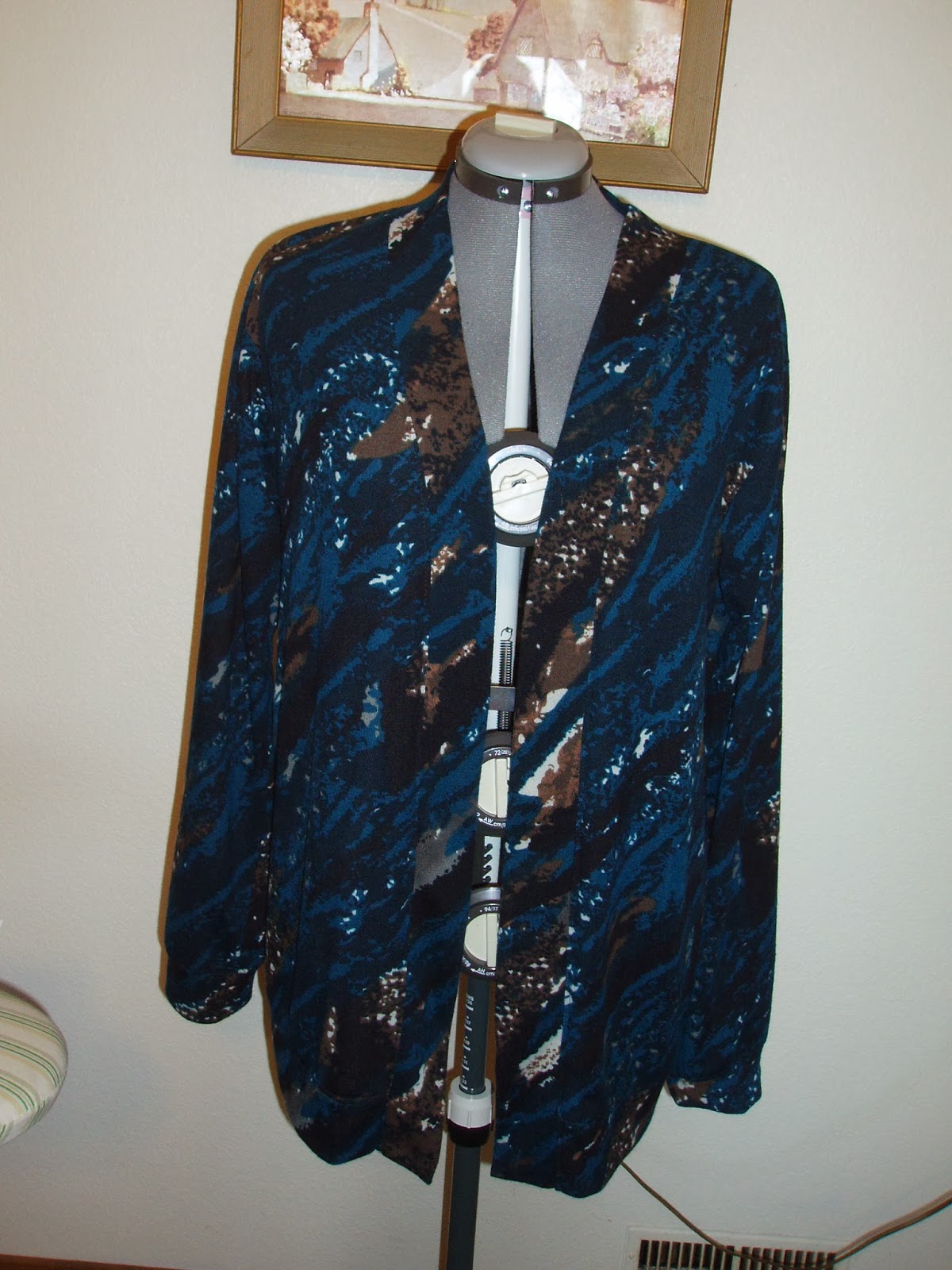 The jacket is M6803, and while is extremely easy to make, it has quite a few of fitting issues - mainly due to the pattern being sized way too big.  Below are the changes/alterations I made to the pattern to make it fit:
1.  I started with a size small and graded it out to a medium at the jacket hip.
2.  I used a size small on the sleeves and they were mega long and wide, so to fix this, I took 1-1/2" off of the length of the sleeve, and 2-1/2" total from the width.  You will have seriously ridiculous sleeves if you do not do this.
3.  The shoulder/sleeve cap is meant to fall over the shoulder a bit, but as the pattern is made, the shoulder falls at least 3" over your shoulder, so I took out 3/4" from the shoulder, and took out about 3/4" from the sleeve cap.

With the above changes, it fits like a gem, and I will use this pattern all the time for my go to simple cardi pattern.  Your fabric choices will make the cardi not look like something from the 70's and 80's.  Looking at the pattern envelope, it quite frankly looks boring and ugly, and for some reason, I was able to see past the ugly...Fabric, fabric, fabric, just sayin' LOL 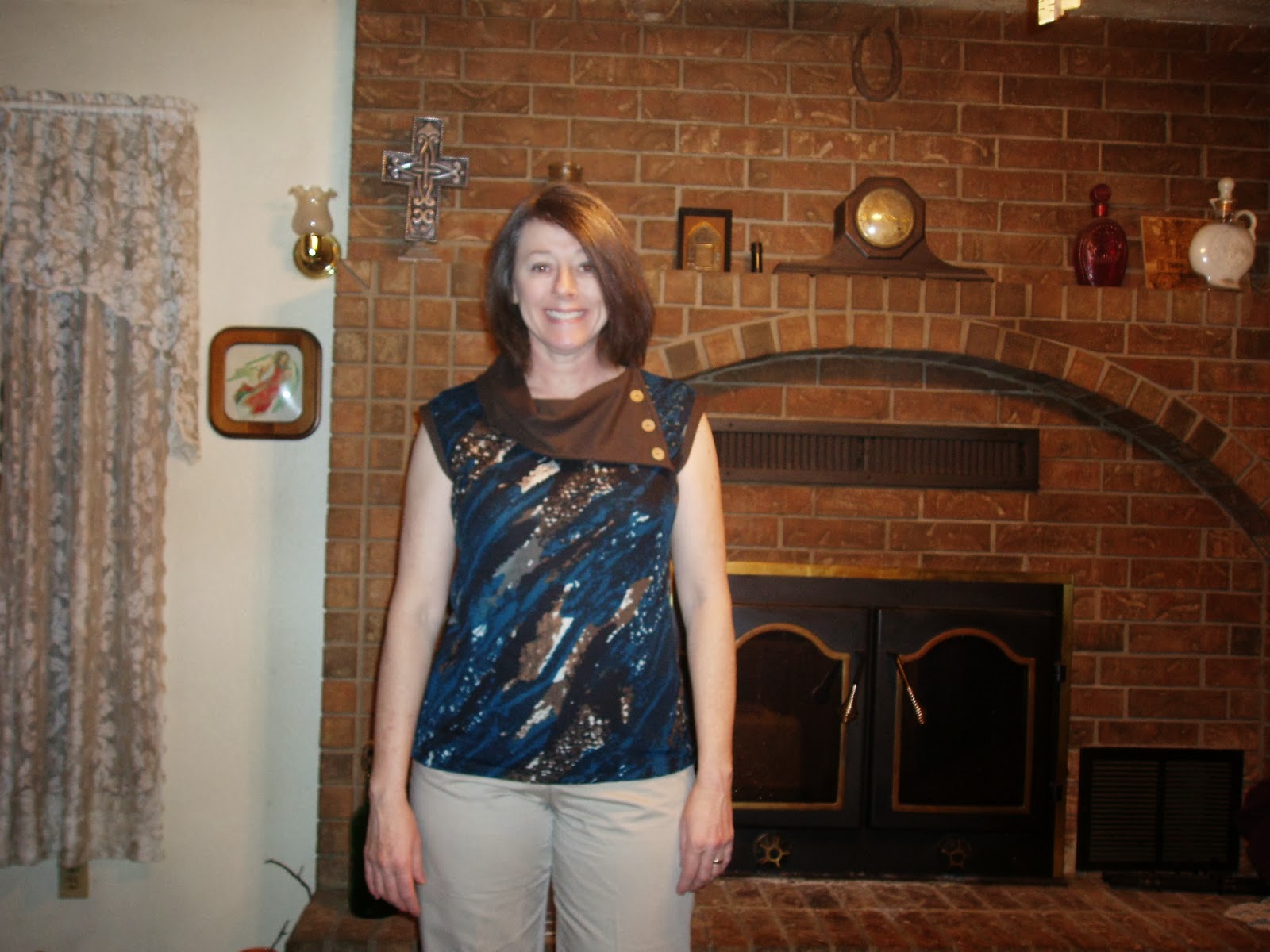 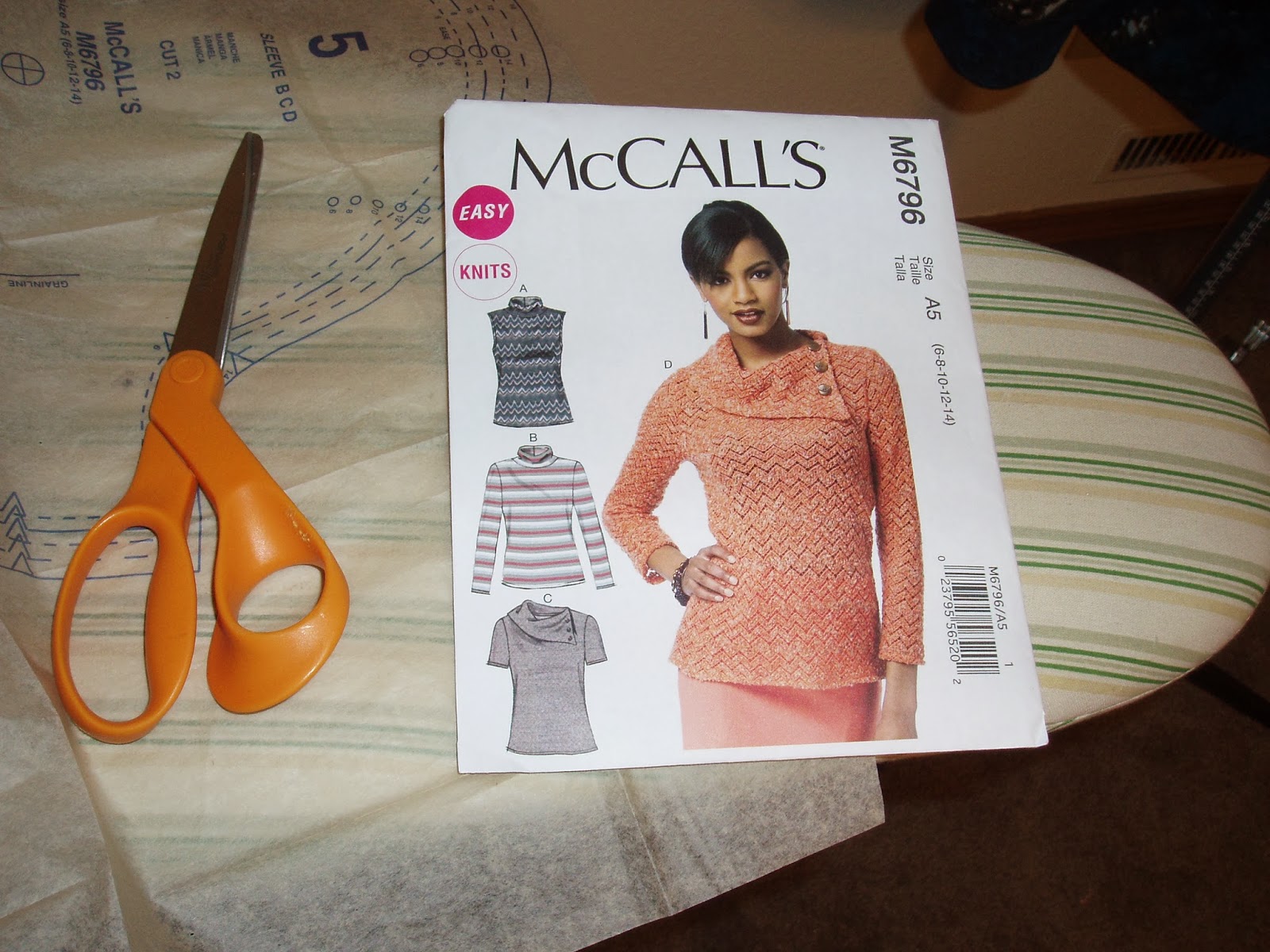 Okay, I wanted a top that matches it, and I had enough of the fabric left over to make the above.  I made the sleeveless version w/ the draped collar.

I cut a straight 14, and it fits like a gem right out of the envelope.  No changes were necessary.  Praise the Lord!  I love this pattern much better than the Sewaholic Renfrew top pattern, because no changes are necessary to get a good fit.  I will use this pattern over and over.

I say no changes were necessary, but the pattern calls for just turning up the sleeve holes and stitching them down.  I didn't do that.  I cut fabric bands from the brown that I used on the collar to give it a more finished look.

BTW, the brown fabric was once a thrift store ponte knit skirt.  I go to thrift stores all the time to find good deals, and/or items that I know I could never wear in it's current condition.  I refashion the unwearable ones, or cut them up and use them to sew articles of clothing.

Below are a couple of tips:

For those who have trouble making neck and/or sleeve bands lie flat, cut the bands 1-1/2" to 2" shorter than what the neck or sleeve measurement is.  You will then fit the band to the neck or sleeve, and when you sew it down, it gives a wonderful flat look.  Works for me every time.

Also, if you do not use a serger to sew knits, and I do not, use your walking foot, as it will pull both fabrics through at the same time, which will aide in the fabric not slipping out of place.  Also, I learned a good trick to add a bit of knit interfacing to the bottoms of hems, etc., and then turn the hem up and sew.  The fabric will be more stable and will not shift. 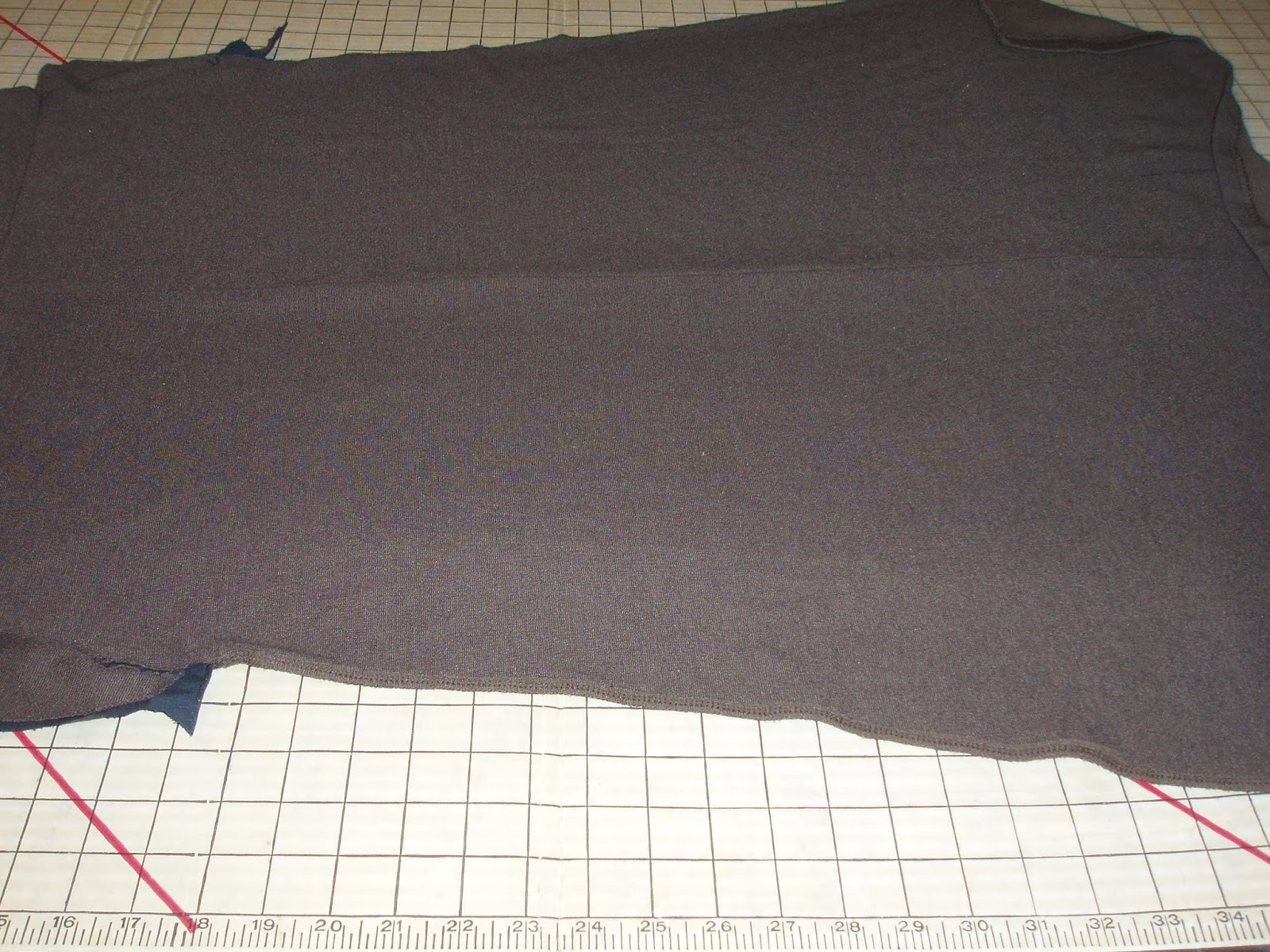